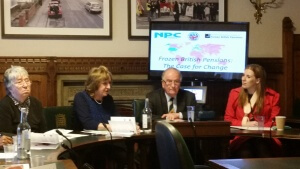 Labour’s new Shadow Pensions Minister, Angela Rayner MP has called for change on frozen pensions and committed herself to helping to find a solution.

Speaking at the APPG’s roundtable event on The Case for Change on Frozen British Pensions on 2 February 2016, Angela Rayner MP said:

“The situation is unfair, illogical and doesn’t make sense.

I welcome cross party support on the issue – we have to find a solution.

The information that both the International Consortium of British Pensioners and the National Pensioners Convention have provided is really good and I am hoping that the government will act on that, because to me there is no reason why not, especially when you look at issues around the cost neutrality of it and certainly when you look at the arguments of people being in poverty when they don’t need to be.

Over 550,000 people are affected by it, sometimes losing over half of the money that they have worked hard for. They fought for our country, they’ve worked hard, paid National Insurance, paid tax for all of those years, and for me it’s completely unjust to continue in the way that way.

Something has to be done and I will continue to work in my new role as Shadow Minister for Pensions to find a solution.

I am pleased there is widespread support to do the right thing and find a way forward.

This is a matter of common respect and decency and I will take a comprehensive look at the issue and what we must do.”

Jeremy Corbyn MP has long supported the campaign for reform on this issue and a change in party policy has been widely anticipated since his election as leader in June.

Rayner told the meeting that Corbyn had appointed her with instructions to take a campaigning approach to her new brief.

Frozen Pensions Roundtable with the NPC and ICBP: 2 February 2016