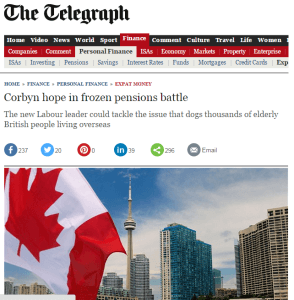 The Daily Telegraph has this week published an article recognising Jeremy Corbyn’s membership of the APPG and historic support for Frozen British Pensioners.

The article suggests that Jeremy’s election as Labour leader will put Frozen Pensions back on the political agenda.

The APPG look forward to working with Jeremy on this important issue.

You can read the Telegraph’s piece here