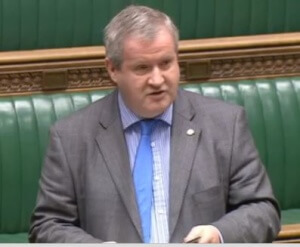 On 24 March 2016 APPG Vice Chair Ian Blackford MP took the opportunity of the Easter Adjournment Debate to call for a debate on the Uprating Regulations that freeze overseas State Pensions.

Ian Blackford argued that given the Uprating Regulations would come into effect in early April, when the Commons would be on recess there should be an opportunity to debate the matter first.

“The uprating regulations that deprive overseas pensioners of the uprating adjustment to their state pensions are being forced through this House without a proper and full debate…. I wonder how many Members will need to sign that praying motion before they will do so.”

Ian Blackford criticised the lack of consistency of treatment of overseas British pensioners. Pointing out anomalies arising from historic bilateral deals and pointing out that there was no need for new bilateral agreements for the government to take action.

He also raised the possible danger for the 400,000 UK pensioners living in the EU, who may find themselves with a frozen pension if Britain votes to leave the European Union in June.

“I believe that the House should have the opportunity to debate the matter, which not only leaves 550,000 UK pensioners facing hardship, but discourages many UK citizens living in the UK from returning to their country of origin, as many wish to do in their retirement.“

“The Government ought to withdraw the measure and pay UK pensioners at home and abroad their due state pension, with the same uprating adjustment, in the interests of fairness and equality.”

A video of Ian Blackford’s speech can be viewed HERE.

The Hansard is HERE.