The Sunday Times reports on the APPG / Letwin meeting 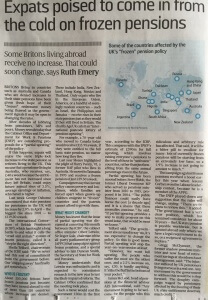 The Sunday Times has reported that the Cabinet Office and Department for Work & Pensions (DWP) are considering proposals for a “partial uprating” of the policy following APPG Chairman Roger Gale’s meeting with Oliver Letwin.

In an important exclusive report, that will be encouraging for frozen pensioners worldwide, the Sunday Times’ Ruth Emery provides an excellent explanation of the issue of frozen pensions and the progress made with the government in recent weeks.

“[The Sunday Times] Money has learnt that the issue of partial uprating was discussed at a meeting this month between the ICBP; the cabinet office minister Oliver Letwin; Sir Roger Gale, chairman of the all-party parliamentary group (APPG) that campaigns against frozen pensions, and a special adviser to Iain Duncan Smith, the Secretary of State for Work and Pensions.

Money understands that Letwin was enthusiastic and is expected to commission research in the new year to test the likely impact of reform. The Cabinet Office confirmed that the meeting took place.”

“The injustice suffered by UK pensioners living overseas is a real one. Any movement by the government to address this would be a step forward. The doughty campaign waged by pensioners affected by the freezing of their UK state entitlement deserves much credit.”

It also cites the former Pension Minister, Steve Webb who said in 2004:

“If partial uprating provides a way to make progress on this vexed issue, that would be most welcome.”

For copyright purposes we cant publish the whole article on this site, but it can be viewed on the Sunday Times’ website here.

The APPG’s report of the meeting with Oliver Letwin can be read here.