Benjamin used her tabled question to ask the government: 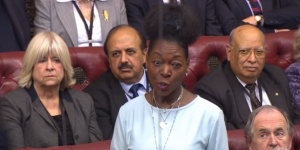 “What assessment they have made of its frozen pensions policy affecting many who would like to move or stay overseas during their retirement years?”

She used her supplementary Question to seek an update from the government on its progress with the research Oliver Letwin MP promised the ICBP and APPG that he would commission back in November.

“My Lords, last November the right honourable Oliver Letwin, met with the International Consortium of British Pensioners and the Chair of the APPG on Frozen British Pensions, and he committed that the government would examine the case for partial uprating, by commissioning cross-departmental research into the likely costs and savings. Which was great news. So can the Minister please provide an update on this work? And will we see a outcome, before the Government brings forward the Up-Rating Regulations that would see overseas pensions frozen yet again for another year, continuing this injustice?” 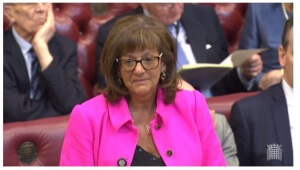 Disappointingly Baroness Altmann’s initial answer differed little from the standard government script on frozen pensions. Altmann cited the government’s clear position, held for 70 years, that while people remained entitled to a state pension overseas they were only entitled to have it uprated where there was a legal requirement to do so. She also said that the government had made no assessment of the impact on choice of residence.

Worryingly, the Minister appeared unprepared to answer Baroness Benjamin’s supplementary question about Letwin’s research. She said that DWP had made no estimates of the costs of partial uprating, but that “external sources” suggested that the cost of partial uprating would be 200m a year by 2020.

Conservative, Lord Howell of Guildford queried Altmann’s figure of £200 million, citing the ICBP’s estimate of a 31.5m year 1 cost of partial uprating.  Altmann clarified that the number she ha
d been given was the cost by 2020 (year 5). The APPG understand this to differ from the ICBP’s estimate, that it would only reach this sum by year 7 (2022) something the government has not yet disputed in direct correspondence with either the ICBP or APPG.

When later challenged by Labour Peer, Lord Harris of Haringey, to answer Baroness Benjamin’s question about Letwin’s research, Altmann admitted that she had no information about work in other departments, but could report that no estimates were being made in her own department. 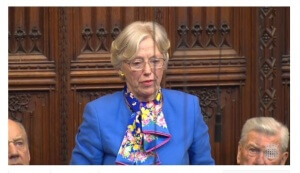 During the question time Conservative Peer Baroness Hooper asked what would happen to the 400,000 pensioners currently living in the EU, if Britain chooses to leave, would their pensions be frozen partially or totally? The Minister said that it had not yet been decided, but maintained that if there are reciprocal agreements or legal obligations to do so then they would be uprated. The APPG remains unclear as to the legal position in the event of a Brexit. There were pre-existing bilateral agreements with some EU countries before the EU took over social security cooperation, but it is not certain that these would still be default positions should Britain leave the EU. Further questions will be needed on this issue. 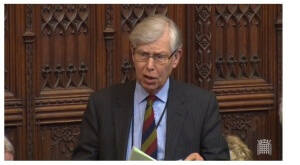 Conservative, Lord Swinfen asked about the savings made for the government by pensioners living abroad by not using the NHS etc. Altmann said this hadn’t been costed and simply cited the half a billion cost of implementing full uprating instead.

Conservative, Baroness Gardner of Parkes asked how many countries pay overseas British pensioners from their own funds to top up the income of frozen pensioners. And how much it would cost if all the overseas pensioners returned to the UK.  Again Baroness Altmann was not able to give a direct answer to either question, but had figures for (the actually unusual case of) Australia in her briefing,  she noted that there was a means tested system there, and said that as a result 25% of uprating payments would end up with the Australian Treasury (the APPG understands that this would only be the case with full uprating, not partial uprating, given the smaller increases involved).

Labour Peer, Lord Morris of Handsworth asked about Gurkha entitlement to an uprated pension. Altmann said she had no information to hand and would write to the Lord.

You can watch a video of the parliamentary exchange. 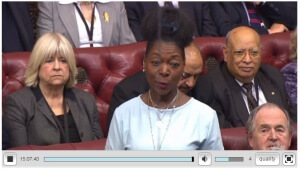 Or read the Hansard.

The Independent’s coverage of the question is here.

The Financial Times’ coverage of the question is here.