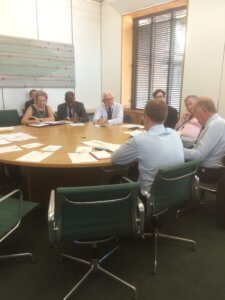 The APPG for frozen British Pensions met for its AGM on Wednesday 14 September 2016. The agenda included the new administration,  Brexit, and frozen pensions in the British Overseas Territories.

The meeting began with the formal business of the group’s Annual General Meeting.  All APPG’s are required to hold such a meeting on an annual basis.

The secretariat reported membership growth (+3 parliamentarians) over the last year.

It was noted that all the existing Officers had volunteered to stand for another year and, in the absence of other nominations, the AGM approved the re-election of Sir Roger Gale MP as Chairman and Registered Contact, Yasmin Qureshi MP, Ian Blackford MP and Lord German as Vice Chairs, and Sir Peter Bottomley as Treasurer.

A report was presented confirming that the APPG had had no income or expenditure in 2015/16. The Chair confirmed that that the “in kind” gift of the time of PHA Media, who provide a secretariat service to the group funded by the International Consortium of British Pensioners (ICBP), would be declared to the relevant parliamentary authorities following the meeting.

There was a discussion on recent parliamentary activity. It was noted that the debate secured by Ian Blackford via the Backbench Business Committee was positive and gave the frozen pension issue a good airing, with everyone who spoke in the debate talking of the unfairness of the current situation. Blackford also pointed to a Social Security SI Debate (occurring the afternoon of the AGM) that would provide another opportunity to raise frozen pensions. The Chair thanked Ian Blackford MP for his significant work in leading the challenge to the Uprating Regulations in recent months.

Sir Roger Gale MP reported that he had recently discussed frozen pensions with Rt Hon Oliver Letwin MP(since he had left the government). He reported that Letwin’s view was that the research report that he recommended that the ICBP commission is necessary next step, in order to persuade the government of the cost/benefit case.

Tim Snowball, for the ICBP, reported that the Letwin brief for the research paper makes sense, but is extremely difficult to meet without access to government data. He reported that the ICBP had commissioned an initial scoping exercise from Prederi Research and would discuss it with the APPG in November.

Ian Blackford MP proposed that the APPG should help the ICBP and Prederi in any way they could to make sure the research was a success.

Sir Roger Gale MP suggested that the Treasury may have money to spend on worthwhile projects after the conclusion of the Brexit negotiations, and therefore it was important to conclude the research in advance to make the strongest case possible at that point.

Lord German agreed, adding that the issue of overseas pensioners will have to be faced up to during the Brexit negotiations, as the 400,000 British-EU pensioners may face having their pensions frozen depending on the outcome of the negotiations.

The group were unsure whether, following Brexit, pre-existing deals with individual countries on social security arrangements would be reinstated and resolved to seek clarification from the government on this point.

Sir Roger Gale MP expressed his view that the most likely scenario would be that current EU arrangements would be continued up until a cut-off point, and that if pensioners emigrated to EU countries after this cut-off date then their status would be the subject of the bilateral negotiations that will take place post-Brexit.

Tim Snowball provided an update on behalf of the International Consortium of British Pensioners. He noted the significant successes of the campaign over the last six months, including the Government (via Oliver Letwin) looking seriously at options for reform for the first time, the winning of Angela Rayner’s support as the official Labour Pensions spokesperson, the strong support demonstrated by the SNP and Ian Blackford’s valiant but sadly unsuccessful challenge to the Uprating Regulations in the Commons, Baroness Benjamin’s oral question in the Lords, and the significant amount of quality national press coverage secured, particularly in the context of the Brexit vote. He thanked the APPG for all their support.

The ICBP noted that recent political upheavals have been disruptive to the political campaign. Particularly the loss of Letwin as key government ally, a negative initial response from Richard Harrington as the new Minister, Angela Rayner’s promotion away from the pensions brief and the loss of Baroness Manzoor as a supportive Lib Dem Spokesperson. It was recognised that without government support, broad based parliamentary support would be essential for any future challenge to the Uprating Regulations and achieving this remained a priority.

The ICBP noted the huge opportunity of the ongoing Brexit negotiations for raising the profile of the issue. Social security arrangements for British Pensioners living in the EU were now under question and this could be used to stimulate discussion of parity for all overseas pensioners. There is also arguably potential for the issue to be raised by the governments of currently frozen countries, for whom this remains a grievance, as part of wider trade deal negotiations.

DISCUSSION WITH REPRESENTATIVES OF THE OVERSEAS TERRITORIES:

The APPG’s meeting was attended by invited guests from the Overseas Territories: Benito Wheatley (UK Representative, British Virgin Islands/Chair of UKOTA), Sukey Cameron MBE (UK Representative, Falkland Islands Government), Janice Panton MBE (Monserrat Government UK Representative) and Kimo Tynes (Consular Officer, Turks and Caicos Islands). There was a substantial discussion regarding the efforts of the Overseas Territories to persuade the government to establish parity of treatment when it comes to overseas State Pensions. Currently only British pensioners living in Bermuda (as a result of a historic bilateral agreement) and Gibraltar (within the EU) receive a fully uprated pension.

Sukey Cameron MBE of the Falkland Islands argued that the relationship between Britain and the Overseas Territories is constitutionally different to that with other states and that this should be reflected in pension arrangements. She also outlined the longstanding grievance of the Territories where pensions are frozen regarding the lack of equal treatment for all Overseas Territories.

The Chair posed a question of whether it is best to pursue the Overseas Territory case unilaterally, or continue to include them in the wider battle.

It was suggested that the Overseas Territories case is worth pursuing unilaterally, as there is a distinct case for special treatment and because any progress on frozen pensions would be welcome. In this context, the APPG offered its support to the Overseas Territories in their efforts, but was clear that their primary focus would remain achieving pension parity for all overseas pensioners.

The APPG recommended that the case for special treatment for the Overseas Territories would be strengthened through a better understanding of the Bermuda exception and relevant aspects of individual constitutional arrangements. The Chair invited the representatives to return to the APPG to provide an update on any progress made at the Joint Ministerial Council meeting in November.