Half a million British pensioners are denied access to annual increases to their UK state pension due to the Government’s ‘frozen’ pensions policy. Baroness Stedman-Scott, Parliamentary Under-Secretary of State for Work and Pensions, was questioned on this unfair policy today in the House of Lords. 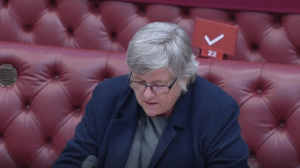