Today, MPs David Linden, Margaret Ferrier and Jim Shannon raised the plight of frozen pensioners during the Social Security (Up-rating of Benefits) Bill. They highlighted the Government’s unfair frozen pension policy which impacts over half a million UK pensioners living around the world. 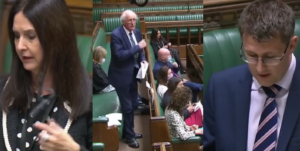