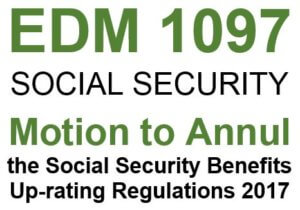 The APPG on Frozen British Pensions has tabled a “motion to annul” the Social Security Benefits Uprating Regulations 2017, the Statutory Instrument used by the Government to freeze overseas state pensions for another year.

The Uprating Regulations are subject to negative parliamentary procedure, which means that MPs don’t have an opportunity to approve this measure, but must instead seek to have it annulled before it automatically comes into force on 11 April. The formal procedure is for MPs to “Pray” against it, in the form of an Early Day Motion. If the Motion secures sufficient support, then it may be awarded parliamentary time for a debate and vote, though this is notoriously difficult.

It is hoped that other APPG members, and supporters of unfreezing pensions from all parties in parliament will now add their names to it.

Parliament is due to rise for Easter Recess on 30 March 2017, which in practice leaves just a week for MPs to successfully challenge the Up-rating Regulations. In practice it is very unlikely that this initiative will be successful unless backed by the Official Opposition. Labour has promised to issue a position statement by the end of the week.