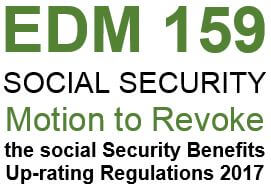 The Official Opposition has tabled a Prayer (EDM159) against the Social Security Benefit Up-Rating Regulations 2017, the Statutory Instrument used by the government last March to withhold the triple lock pension increase from 550,000 recipients living outside the UK.

EDM159 was tabled by Labour leader (and APPG Member) Jeremy Corbyn, and co-sponsored by Labour’s Shadow Chancellor, John McDonnell and Shadow Secretary of State for Work and Pensions, Debbie Abrahams.

The Motion calls for the Up-rating Regulations to be revoked, the strongest measure possible, as it is now too late for it to be annulled (the request of EDM1097, tabled by the APPG in the last parliament).

It is hoped that the new motion could receive time for a debate and vote when parliament returns from its summer break.